Last week I compared Aaron Rodger’s 2016 season to Super Bowl winning 2010 season. In both, there was a drastic improvement seen in the second half of the season. With the Packers beating the Cowboys last week, they move forward to the Conference Championship weekend to face the Atlanta Falcons. Steelers and Patriots face off in the AFC, which means there are four powerhouse quarterbacks all looking to take their team to the Super Bowl this year: Matt Ryan, Aaron Rodgers, Ben Roethlisberger, and Tom Brady.

Here’s a breakdown of their performances since week 11: 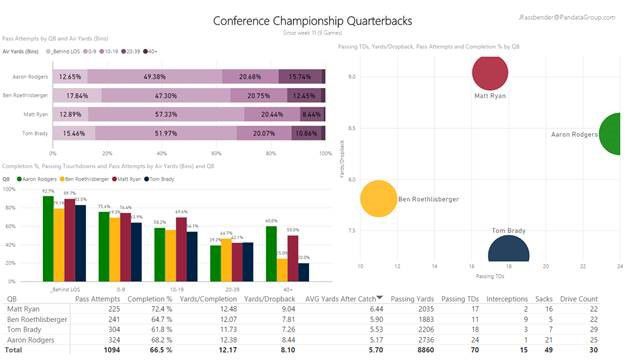 - NFC Conference Championship is going to be a shootout!!

James Fassbender is a BI Consultant with Pandata Group. In addition to being an aficionado of football stats he is also a technologist with a passion for data and analytics. If you’d like to learn more about the work behind this PowerBI-driven dashboard, please reach out to James at jfassbender@pandatagroup.com.